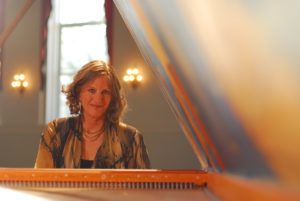 Harpsichordist Elaine Funaro is “regarded as one of the leading performers of new music for harpsichord” (Classical Music: The Essential Listening Companion).  She is a popular presence at contemporary and early music festivals around the world, and was the first, now past, president of the newly merged Historical Keyboard Society of North America, and is currently the Artistic Director of Aliénor, the American-based international competition for new harpsichord music.

Ms. Funaro began her harpsichord studies at the Conservatorio Cherubini (Florence) with Annamaria Pernafelli.  Following her graduation from Oberlin and the New England Conservatory, her advanced studies took her to the Amsterdam’s Sweelinck Conservatory.  Her teachers have included Ton Koopman, John Gibbons, Lisa Crawford and the late Gustav Leonhardt.

Ms. Funaro’s foundation in the classics fully supports her passion for contemporary compositions, expanding her repertoire to five centuries of harpsichord music.  She has performed at the Boston Early Music Festival, Amherst Early Music, Berkeley Early Music Festival, Bloomington Early Music Festival and Oberlin Baroque Performance Institute.  She has also introduced audiences on five continents to the new world of modern compositions, many of which have been Aliénor winners, having premiered works in London, Amsterdam, Rome, Sydney, Boston, Tallinn, Hong Kong and Tokyo. She is also the past president of the Historical Keyboard Society of North America.

In addition to her solo recitals at the Smithsonian Institution, the Library of Congress and in other notable venues, Elaine Funaro has been a frequent collaborator with symphonies and chamber ensembles. Her appearances often present modern compositions in the context of old and new musical traditions from around the world, yet her impassioned solo and chamber interpretations of traditional scores for her instrument remain a core element in an exceptionally active career.

Elaine Funaro has recorded for Arabesque, Centaur, Gasparo, Wildboar, and Classic Concert, and she currently serves as Aliénor’s artistic director.  In the spring of 2012, Elaine became the newly elected president of the Historical Keyboard Society of North America.

Elaine Funaro performs on a custom-made contemporary harpsichord, the Kingston Opus #333, which is decorated throughout by original artwork from North Carolina artist Lisa Creed.